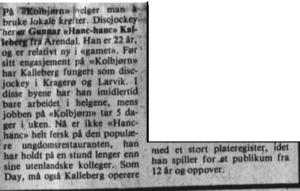 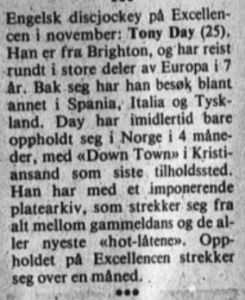 Navn: Andreas Sebastian Haldorsen
Dj alias: PistolPuma
Musikkstil: Funky house, elektro house og vokal house
Spillesteder: Dixon, Castelle..
Aktiv fra: 1998 til i dag
Fra nettet: At 12 years old PistolPuma threw his saxophone away, and started punching in beats on his neighbors Amiga. Soon he got his own equipment, and was always to be found right on top of it. He started dj`ing in 1998, and soon got his residence at the biggest club in his hometown Arendal.

Today PistolPuma is one of the biggest names in the Norwegian house scene. He is the owner of Houselective Records, and his productions and mixes are freqently played by big-name-dj`s and radio stations across the world. His gigs around the world ranging from underground clubs to private jets and the Royal Albert Hall.

He is also known as Seb Monet.

Navn: Anwar Bitár
Dj alias: Dj Subway
Musikkstil: Jungle, Drum ‘n’ Bass og electro
Spillesteder: Spilte på Dirty South, Kultur Cafeen og andre arr i byen.
Aktiv fra: 1997
Fra nettet: DJ Subway is a Norwegian Drum&Bass and Jungle DJ, booker and promoter located in Bergen, and is one of the main figures in the Norwegian Drum&Bass scene. He’s been playing massive beats for over two decades, as he started his musical career as a DJ back in 1997, his sound is deep and deadly with the best beats and the darkest bass, his nickname «The Dark Soldier» is well deserved.

His presence behind the turntables is unprecedented, winding up the dancing crowd into a frenzy of joyful mayhem on the dancefloor with his strictly all thrillers no fillers dj-sets! He has played alongside artists and other DJ’s such as Goldie, Ed Rush, Lenzman, Doc Scott, TeeBee, Raiden, John Rolodex, Photek, Counterstrike, Serial Killaz, Terry T, Future Prophecies, MC Navigator, Concord Dawn, PsychoFreud, Rawthang, System Noise, Gracie T, Broken Note, Tim Reaper, Charlie Tee, DJ Marky, MC GQ and Commix to name a few.

DJ Subway is at the moment part of the dj and artist collective Veldig Klubb, which is a radioshow that is broadcasted live every second saturday, with national and international guests djs and artists. Founder and co-founder of Drum&Bass club nights ROOM 101, Drum Club, We Love Drum&Bass! and Riot Club. ROOM 101 has been up and running since 2008 and has it’s residency held regularly at The Villa in Oslo. Norway’s only club who has made it into the DJ Mag’s Top 100 clubs in the world.